Muay Thai: A brief history and getting it FASTER’ised! Part 1

Muay Thai: A brief history and getting it FASTER’ised! Part 1

Welcome to this first and new blog on the art of Muay Thai! My name is James; I’ve been working as a trainer for about 7 years now, it’s been a rather nomadic career; taking me from gym to gym, even to Saudi Arabia and back! One thing has always remained a consistent though: the ideas and ideals of Muay Thai. Now, acting as a Training Expert and tutor for FASTER, it is more than a pleasure to introduce you and the world (in a microcosmic sense) to Muay Thai as a martial art, a self-defence, and as a way of life!

Now, before I gush anymore over this and get you absolutely lost, I figure I’d give a bit of a back story on Muay Thai and how / why functional training is, to use a word: incredible for improving a person’s conditioning and make amateurs into pro’s in no time at all!

Let’s start with a bit of history: to say Muay Thai is ‘an ancient art’ is both true and false! There are many myths wrapped around this; these range from Japanese boxing promoters that the Thai’s tried to introduce and forgot the rules, to two French brothers getting annoyed that they couldn’t hit their opponent (which if true would’ve inspired Savate), the reality is something else, if not just as awesome!

It derives itself from the military style, referred to as ‘Muay Boran’; if you’ve ever heard of Tony Jaa: he fights using this style! During the period of time that Thailand was known as the Kingdom of Siam, this was the discipline taught to their warriors as they fought with the dynasties of Burma and Cambodia, this would be around the 16th century time: See what I mean? Here is the ancient origin. Although, there are theories that travellers from as far as Macedonia were responsible for some of the moves commonly used to this day! Ancient indeed.
Now, THAT Muay Boran! Although, if you were to look up videos of Boran, a lot of weapons are used, acrobatic movements and… Well. Killing, hardly ideal for a competitive sport unless the goal was to make health and safety lose it! This is where it becomes modern: in the 19th century, King Rama V entered the scene and changed the rules of competition from a ‘2 enter, 1 leaves’ scenario, to a performance and competitive sport (gradually it should be said). This is in 1910, the very first time it is titled is not until 1913; when it’s added to school curriculum across the country!

And here is where it formally becomes the sport that we see today! In 1923, Lumpinee stadium is built! And with it, a year or two later, the official rules of Muay Thai are formed and the first fights christen the ring.

Now it’s all well and good me telling you the history, but two things come up: one = I’m not a historian, I’m a coach, and secondly: YOU’RE A COACH! You and I need to actually know what this involves and why it’s so cool! So here it is!

This art is known as ‘the science of 8 limbs’ for a reason: It incorporates Punches, Kicks, Knees and Elbow strikes, with divisions of professionalism that vary slightly, but are similar to Boxing in the western world: C class for pro (White Collar in Boxing), B class (for Olympic Commission and Pro) and A class (Pro), and the class of fight determines what you can / can’t do and what armour you have! Here’s a bit of a break-down.

C-Class: No elbow strikes, no armour except Crotch and Mouth Guard

B-Class: All Strikes allowed,  no Body, head and shin guards allowed with Crotch and Mouthguard

A-Class: All strikes allowed, no armour except Crotch and Mouth Guard 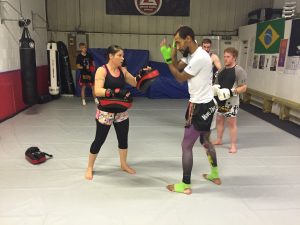 Well, what would you give a boxer? Or a Mixed Martial Artist? That’s right, you’d give them functional skills exercises! While I don’t suggest you start climbing mountains balboa style, functional training is massively important! And I’ll tell you why:

Functional training allows the fighter to get a great idea of their strengths and weaknesses during the sessions; the energy and training systems called upon during a fight (ATP-Pcr / anaerobic) would be hit hard during functionally adapted sessions: they are also exceptional for providing a new session every single day and increasing variety. 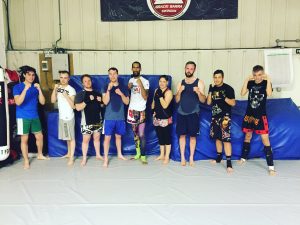 The last point with regards to functional training is the psychology of it all: and what I mean by this is the motivation to continue doing these exercises, understanding the ‘why’ of exercises, and the psychology of the attack. And really, the amount of grappling, throwing and complex lifting requires just as much attention, aggression and skill as a fight would.

I hope you found this blog good for getting an understanding for Muay Thai and just how much functional skills training can help fighting!

This will hopefully be part 1 of a 2 or multiple part series on Muay Thai. From the time I’ve been studying with FASTER, I’ve found its courses blended incredibly well with martial arts while providing a great, credible system of incorporating skill development, conditioning and rehabilitation with scientific studies. The next part will be on the subject we’ve just grasped at in this one: Skills and FASTER, and what skills (according to FASTER) are the most prevalent in Muay Thai

We are looking for the next set of trainers to lead the industry. If you are interested in learning more about FTE click here:  FASTER’s Training Experts Course